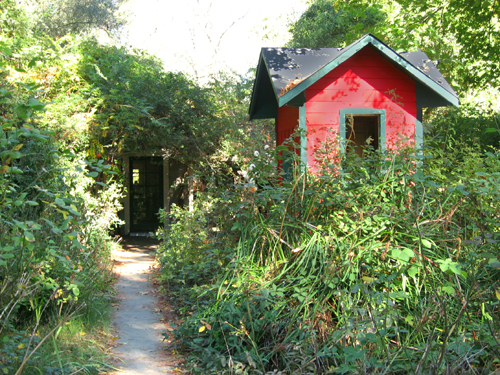 Left: The Lucky Mojo Curio Co. shop in Spring, 2006.
The Walnut tree behind the shop is just beginning to leaf out
and the early roses are starting to bloom.
Right: We have achieved Church! It's Fall, 2006 now,
and the Walnut tree is bare of leaves, but look
what has sprung up along the path! it's
MISSIONARY INDEPENDENT SPIRITUAL CHURCH.

As you can see by the pictures in this month's photo-gallery, we have decided on a colour scheme for Missionary Independent. We are going with barn red, hunter green, and yellow doors and casing trim. These pictures show the progress made by Roger Rupe, our carpenter, and Don Roach, our painter, as of Halloween, 2006. 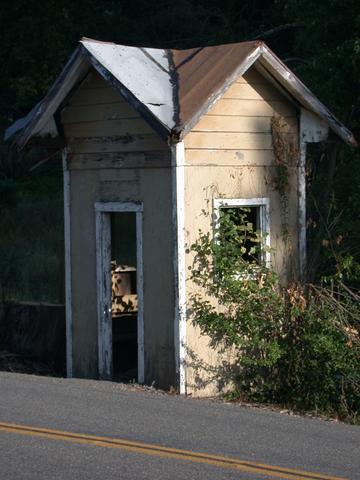 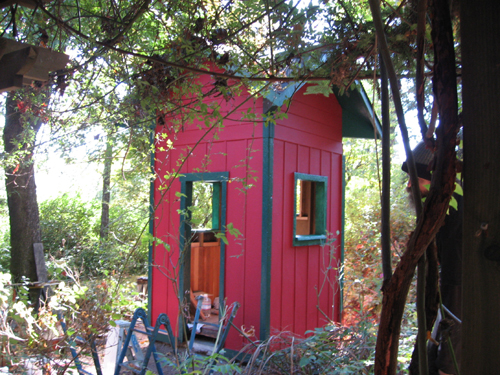 Left: The Burgess Bus Stop at its original location on Laughlin Road. The door faces South and the window at right is the East window.
Right: The building relocated and rotated 180 degrees. The door now faces north, and what was the East window is now the West window. The door panels, casement windows, vents, and a few pieces of trim are still missing, but the vertical batten boards have been added and the first coat of new exterior paint is on. The interior, which was unlined except for wooden built-in benches, is being lined with beaded-board wainscot, cap moulding, and walls. Through the West window (at right) you can see a portion of the new South window, which has been cut into the formerly blank North wall, and will now feature a stained glass window. 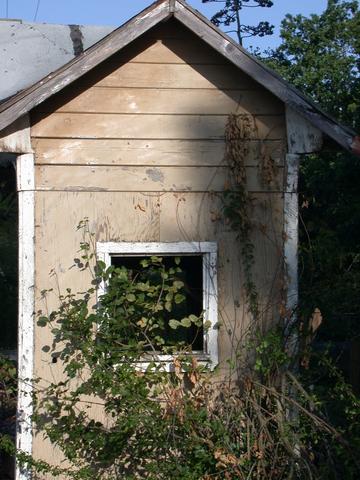 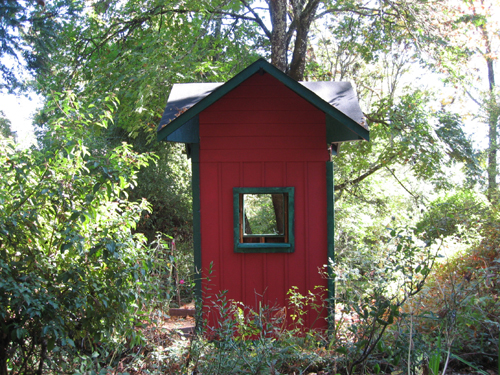 Left: The Burgess Bus Stop at its original location on Laughlin Road. The East wall.
Right: The building relocated and rotated 180 degrees. The same wall is now the West wall. Notice also the vertical batten boards, which have been added to mask repairs to the damaged original plywood, and to add shadow-relief details to the otherwise unornamented lower walls. 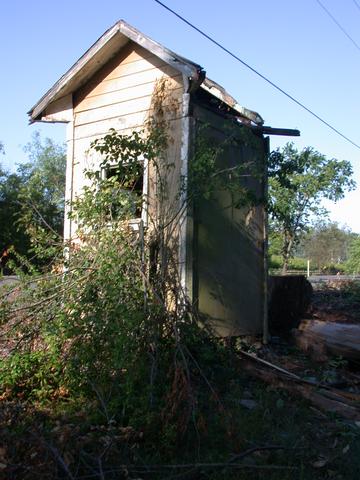 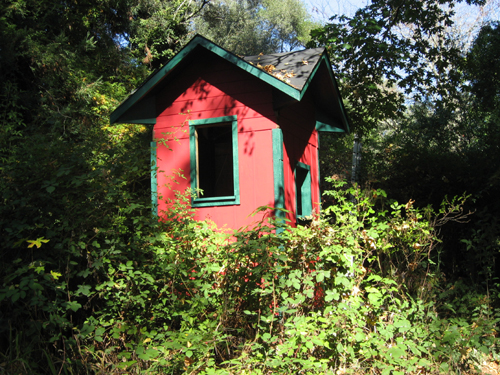 Left: The Burgess Bus Stop at its original location on Laughlin Road. The North-East corner, showing the blank North wall and the total destruction of the North gable, which is laying in pieces on the ground.
Right: The building relocated and rotated 180 degrees. The South-East corner, showing the new South window in which stained glass will be installed. This picture is essentially a mirror-image view of the one at left, but is difficult to recognize as such due to the missing gable on the left, the result of a Eucalyptus tree being felled on the Bus Stop. At right the gable is restored, and the new South window breaks up the monotony of the formerly blank North wall. 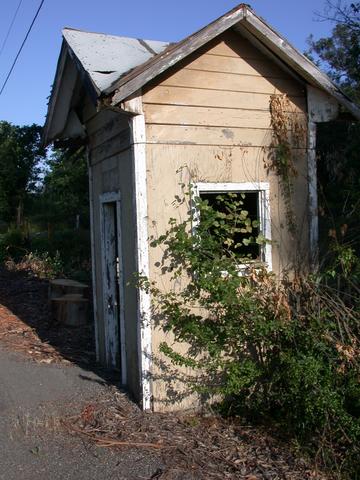 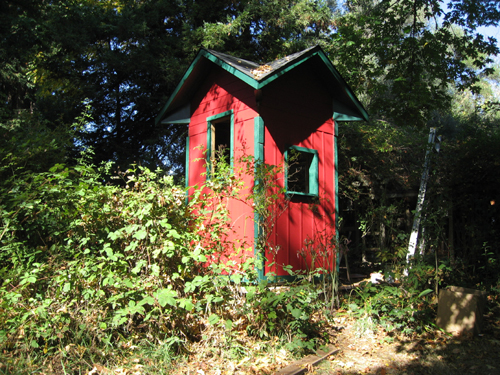 Left: The Burgess Bus Stop at its original location on Laughlin Road. The South wall with door. You can see that the building, which was originally at road level, is now below grade, as the road has been repaved many times since the Bus Stop was built. At left is the stump of the giant double-trunked Eucalyptus tree which was toppled upon the building
Right: The building relocated and rotated 180 degrees. The East wall, at right, used to be the West wall; the South wall, at left, used to be the blank North Wall. This view was taken from the lawn and shows how the building is now well above grade. 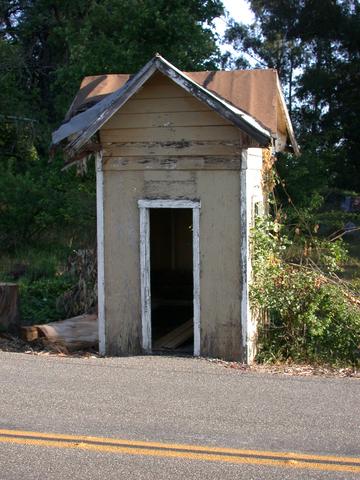 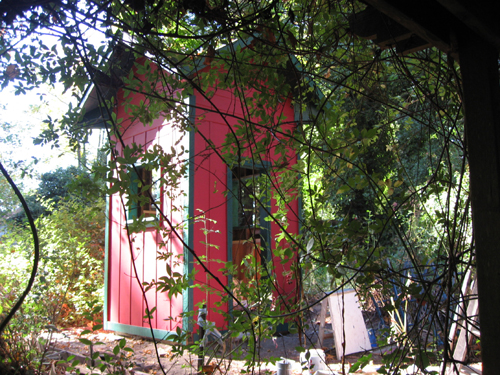 Left: The Burgess Bus Stop at its original location on Laughlin Road. The building's below-grade condition caused a lot of rotting of the wood at the lower corners. At left is a portion of one of the two Eucalyptus trunks that destroyed the roof gables when the tree was cut down.
Right: The building relocated and rotated 180 degrees. The lower corners, now all above grade, have been repaired and reinforced with external plinth blocks.

I take as my text today the Book of Matthew, 22nd chapter, verses 15 through 22.

At that time, when Roman rule lay heavy upon the Jews, some of the Jewish religious leaders, whom we now call the Herodians, sided with the Romans, even though the Romans, by their own particular customs and ways of governing, were desecrating the Jewish Temple and violating the Ten Commandments. These Herodian boys were the collaborators. They not only paid their taxes to the Romans, they didn't so much as put up a fuss about it.

At the same time there were other Jews, a group of devout Jews whom some folks call the Pharisees, who protested Roman rule. Some of them tried to live above and outside Caesar's laws, and to abide by Israel's covenant with God. Some of them were tax refusers, and even tried not to touch Roman money.

And along come Jesus, and he was preaching, and he had many followers, and most of his followers were poor Jews, and some of them were pretty radical. So these two groups, the Herodians and the Pharisees, they were trying to figure out which side of the tax question Jesus came down on. Was he pro-Herodian or pro-Pharisee?

So they asked Jesus, who had a reputation as a rebel leader and a renunciate man of God, said, "Tell us what you think. Is it lawful to pay taxes to the Roman emperor, or not?"

Now, if Jesus had sided with the Herodians and said, "Yes, pay your taxes," he would have been accepted by the pro-Roman Jews who paid their taxes. But many Jews, especially the poorer followers of Jesus, saw those Herodians as traitors to Jewish self-rule -- and to them, if Jesus was on the Herodian side of the tax issue, he would have been seen as a pro-Roman agent and no Messiah.

On the other hand, if Jesus had sided with the Pharisees, which were the Jews who were trying to maintain Jewish religious laws under Roman rulership, and if he said, "No, don't pay your taxes," then the Pharisees, who didn't really like him much anyway, would have cheered while the Herodian collaborators got him tossed in jail.

Now Jesus, like Solomon before him, was a wise man. He didn't answer the question straight away. Instead, he said, "Show me the coin used for the tax." He himself did not carry any coins in his pocket -- at least not any Roman coins, which may tell us something about where his true sympathies lay -- but in any case, he said, "Bring me one of those coins that are used to pay the tax," and the old boys fished one up out of their change-purse and handed it over to him.

"Now," said Jesus, although he knew it very well, "Now," he said, "Tell me whose face is on this here coin."

Well, that coin was a denarius, and on it there was stamped a picture of the Roman Emperor Tiberius, with the words "Tiberius Caesar Augustus, son of the divine Augustus, high priest." You see, this Caesar called himself the high priest of the Jews and he even claimed that he was the son of a god, the "divine" Augustus Caesar.

So Jesus, when they told him that Caesar's face was on the coin, he spoke right back to them, as it says in the Book of Matthew, and he said, "Render therefore unto Caesar the things which are Caesar's; and unto God the things that are God's."

Since that time to this, these words of Jesus have been widely quoted by the followers of his teachings, and by the detractors of his church as well. Most people take his statement to mean that a church may be in the world, yet it is not entirely of the world -- that a church will and must deal with the rulers of the land, even though these rulers might be godless murderers -- and yet that same church must also account to its true leader, the Godhead, the divine source of all.

The founders of the United States of America were not like those old-time Roman conquerors that pushed the Jews around. They believed that no one religion should be put above another, and so their laws have left our churches and our synagogues and our temples and our store-front ministries with a lot of freedom. We can worship as we choose, as long as we don't break "Caesar's" rules.

We all know about the wonderful religious freedom we have here in the United States, and we can thank the Founding Fathers for that gift. But those fellows went one better than that, too. They made it so that in America a church, if it truly is a church -- if it functions as a church ought to function by holding services, and helping the poor, and ministering to those in need -- well, that church is tax-exempt and doesn't have to pay any taxes. The pastor of that church does not have to get up in the morning and "render unto Caesar," because his work is of God and need only be rendered unto God.

Well, that's the theory, at least.

In practical, actual fact, the pastor can sit around counting his blessings and writing his sermons, but someone has got to go out among the congregation and take up collections, and the counting committee has to count the money, and the building committee has to write a check for the man with the lumber and the man with the paint buckets in order to keep the church building in trim, and the board of directors has to get all of the church's ledger books in order so that they will pass muster with Caesar's men.

Missionary Independent Spiritual Church is in the process of applying for tax exempt church status. There are a lot of hurdles to jump before we make the grade, but we are on the way. Wish us luck.